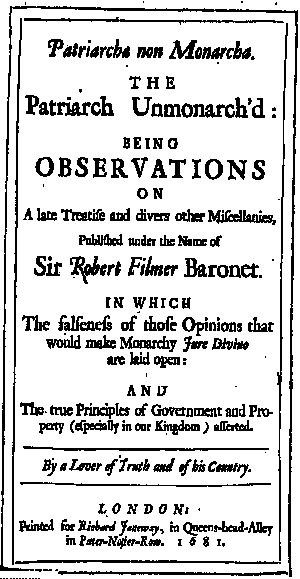 Tyrrell was a friend and supporter of John Locke who also joined in the battle against the ideas in support of the divine right of kings expressed in the work of Sir Robert Filmer. There is much in this book about the power of the husband over his wife and servants and to what extent these powers are applicable to a monarch who claims similar rights over his subjects.

Patriarcha non monarcha. The Patriarch unmonarch’d: Being Observations on a late treatise and divers other miscellanies, published under the name of Sir Robert Filmer Baronet. In which the falseness of those opinions that would make monarchy Jure Divino are laid open: and the true Principles of Government and Property (especially in our Kingdom) asserted. By a Lover of Truth and of his Country (London: Richard Janeway, 1681).