Home / Titles / The Black Book: An Exposition of Abuses in Church and State (1835)

The Black Book: An Exposition of Abuses in Church and State (1835) 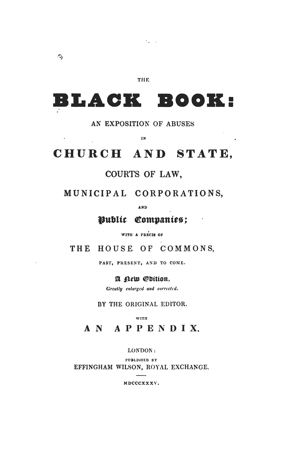 An extraordinary document which details the corruption and financial abuses of the British government as well as the sinecures and privileges of the army, church, and other groups. It was drawn up by John Wade as part of the radical movement to expand the franchise in England. It went through many editions. The work is an excellent example of the Philosophic Radicals class theory of political power. This edition one is the revised and expanded edition of 1835. Previous editions were known as the “extraordinary” Black Book.

The Black Book: An Exposition of Abuses in Church and State, Courts of Law, Municipal Corporations, and Public Companies; with a Précis of the House of Commons, Past, present, and to come. A New Edition, greatly enlarged and corrected to the present time. By the Original Editor. With an Appendix (London: Effingham Wilson, Royal Exchange, 1835).

The text is in the public domain. It was scanned and originally put online by Google for non-commercial, educational purposes. We have retained the Google watermark as requested but have added tables of contents, pagination, and other educational aids where appropriate.