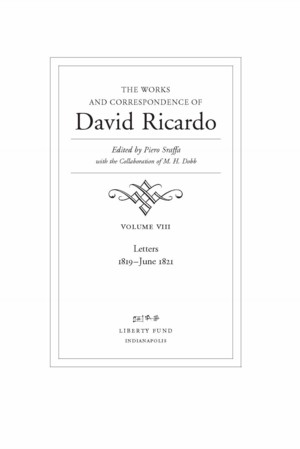 This period of Ricardo’s life witnessed his entrance into Parliament as a member of the House of Commons where he became an influential advocate of free trade through his opposition to Britain’s restrictive “Corn laws.” These letters preserve the intellectual give-and-take on many of the political economic issues of Ricardo’s age. The list of these eminent correspondents include: T. R. Malthus (1766-1834), an eminent economist, was a professor of History and Political Economy at the East India Company Haileybury College. Jeremy Bentham (1748-1832) was the leading philosopher of utilitarianism. Jean Baptiste-Say (1762-1832) was a businessperson who became interested in economics and went on to provide significant contributions to the field, most notably Say’s law of markets.