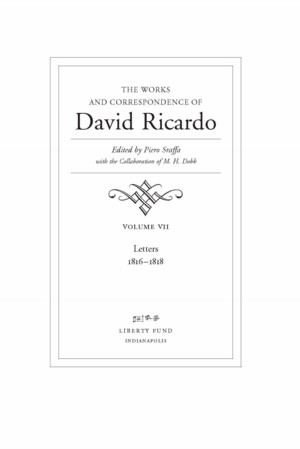 Volume 7 is the second volume of four volumes comprising the collection of letters. It spans the years of Ricardo’s life from 1816 to 1818. This period saw the development and initial defense of his most influential work On the Principles of Political Economy and Taxation. The exchange of ideas found within this volume of letters helped shape and refine Ricardo’s thoughts on the allocation of money between capitalists, landowners, and agricultural workers. The researcher will find, among these letters, useful criticisms of Ricardo, elucidations to and from Ricardo, and general ovations and concurrences. The majority of the correspondence is with noted writers with whom Ricardo shared an intellectual give-and-take on many topics of the time. Among the many luminaries found within this volume are James Mill, T. R. Malthus, and Jean-Baptiste Say.