The Works and Correspondence of David Ricardo, Vol. 3 Pamphlets and Papers 1809-1811 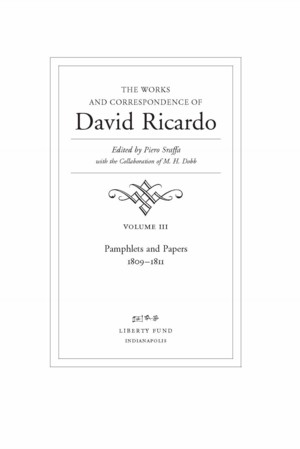 This volume focuses on Ricardo’s shorter essays printed in the Morning Chronicle, which deal exclusively with his thoughts on the inflationary monetary policy of the Bank of England and Britain’s consequent Bullion Crises. In these essays, the genesis of Ricardo’s theory of “hard money” emerges as a tool to hedge against inflation using metallic currency. The Bullion Committee, created by the House of Commons in 1819, subsequently adopted his recommendations. His writings here gave rise to the currency school of hard money.

The Works and Correspondence of David Ricardo, ed. Piero Sraffa with the Collaboration of M.H. Dobb (Indianapolis: Liberty Fund, 2005). Vol. 3 Pamphlets and Papers 1809-1811.