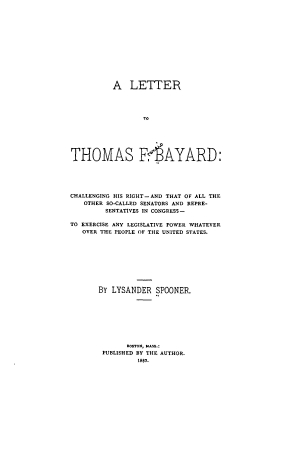 A letter which first appeared in Benjamin Tucker’s journal Liberty in 1882. Bayard was a Democratic Senator from the state of Delaware who believed that enlightened people like himself were the fittest to govern in the US. Spooner rejected this idea.

A Letter to Thomas Bayard: Challenging his right - and that of all the other so-called Senators and Representatives in Congress - to exercise any Legislative Power whatever over the People of the United States (Boston: Published by the Author, 1882).