The Principles of Free Trade 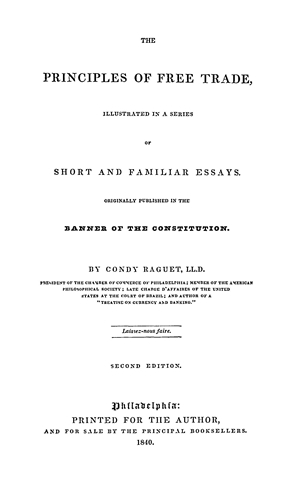 A collection of essays written in the early 1830s as part of a campaign in favor of free trade. The second edition of 1840 contains the minutes of a Free Trade Convention held in Philadelphia in 1831 as well as a dedication to Colonel Biddle the editor of Jean-Baptiste Say’s American edition of the Treatise on Political Economy.

The Principles of Free Trade illustrated in a series of short and familiar Essays originally published in the Banner of the Constitution, 2nd ed. (Philadelphia, 1840).