Home / Titles / A Guide for the Perplexed

A Guide for the Perplexed 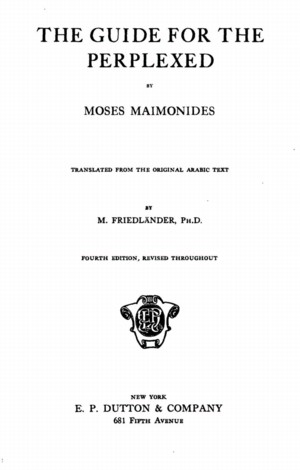 Moses Maimonides was one of the foremost intellectuals of medieval Judaism. He became physician to Sultan Saladin (1137/8-1193), the famous Islamic military leader. While in Cairo he wrote many volumes on Jewish legal tradition and philosophy. He is best known for his lexicographic works in logic and his piece on the relationship of reason to religion, A Guide to the Perplexed. Like his Islamic counterpart, Averroes, Maimonides considered philosophy and religion to be mutually supportive. He also thought more attention should be paid to making Judaism consistent with rational thought.