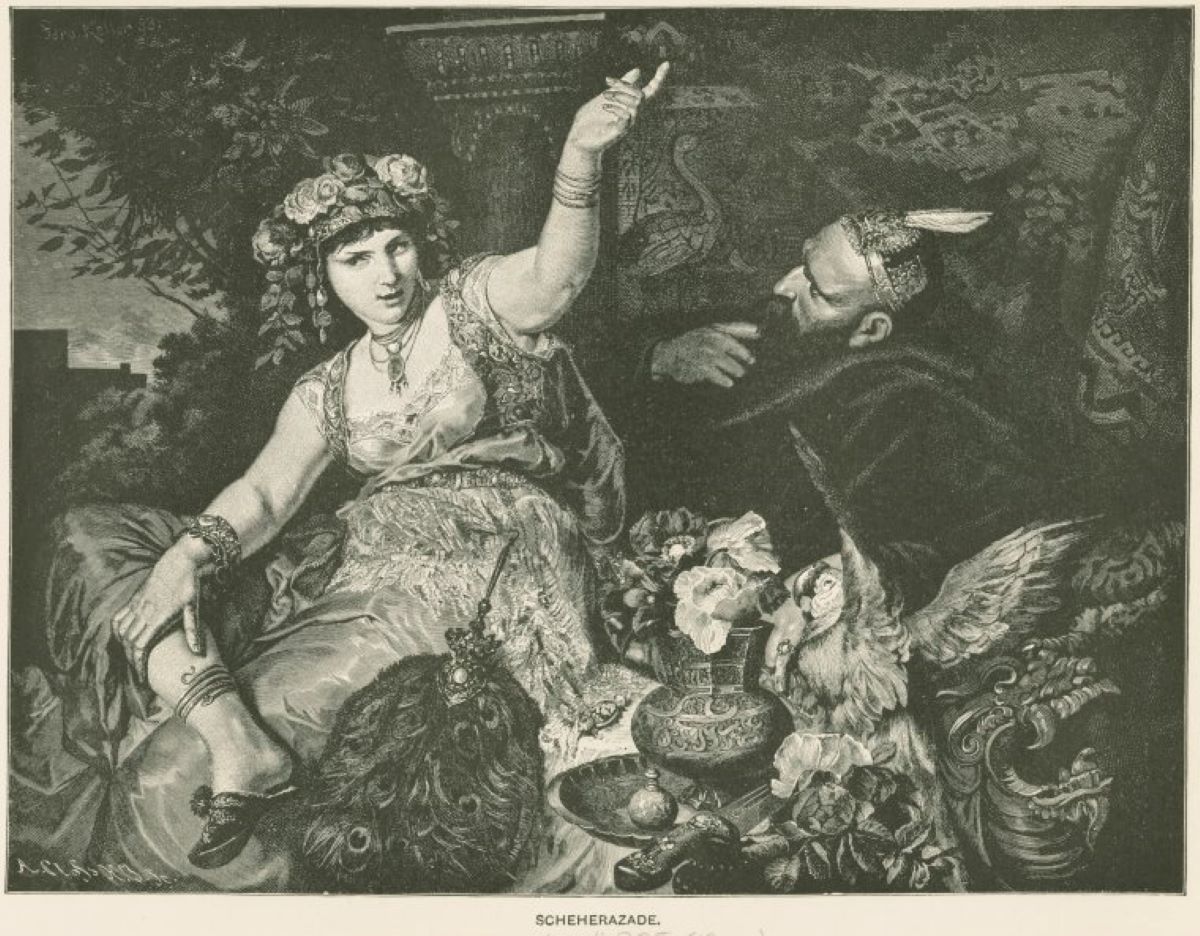 The classic collection of middle eastern stories known as  The Arabian Nights is not in the Online Library of Liberty, which is perhaps understandable given its emphasis on irresponsible liberties taken and arbitrary exercises of power.
But inspired by David Quint’s argument (in Epic and Empire) that the romance genre and its wandering adventures contrast the interests of commercial culture to the imperial motives of the teleological epic, I want to make a similar case for The Arabian Nights.

In contrast to the martial and imperial values embodied in Homer’s Iliad and Virgil’s Aeneid, the stories of Shahrazad (or Scheherazade, in older translations of the Arabic) give voice to the silk road cultures that formed the heart of international trade throughout the medieval and into the early modern era.
Curiosity over Glory. In the Arabian Nights, irrepressible curiosity replaces the wrath of Achilles, or martial honor, as the central motivator of human action. The world of the Arabian Nights is still an honor-based society in many respects, however. The opening framework of the stories, famously, involves King Shahrayar engaging in a daily pattern of pre-emptive honor killings of new wives following the discovery of one wife’s infidelity.
Yet even in this framing prologue, Shahrayar’s curiosity plays at least as strong a role as his horrifically misguided sense of honor. The infidelity of Shahrayar’s wife is discovered by a visiting brother, whose depression at his own wife’s infidelity is lifted by the realization that his misfortune is less than Shahrayar’s. When the king comments on his brother’s changed demeanor, the brother asks not to reveal the cause of his recovery, leaving Shahrayar “burning with curiosity.” It is that curiosity as much as his misguided honor and pride that leads Shahrayar to his immoral and destructive plan.
This tragic side of curiosity is captured in a much-repeated adage, “I would be sitting pretty but for my curiosity,” which first appears when Shahrazad’s father attempts to dissuade her from marrying Shahrayar in order to stop his killing spree. But unlike her father, Shahrazad recognizes that curiosity is also the seed of creative innovation that can improve the world. As she tells him, “Such tales don’t deter me.… If you wish, I can tell you many such tales.”
Shahrazad goes on to tell the many tales of the Arabian Nights to Shahrayar, playing on his curiosity to remain alive—but also to subtly educate and reform the misguided king. While her stories are filled with princes whose curiosity costs them their wealth and status (and often an eye), they are also filled with creative thinkers whose lives are enriched—often in unpredictable ways—by this inescapable trait of human nature. While honor and integrity remain important, it is curiosity and innovation that drive the tales of the Arabian Nights, just as they drive the commercial world of the collection’s original readers.
The Tongue is Mightier than the Sword. In a commercial world it is not surprising that success is more dependent on a quick wit and a persuasive tongue than on military might. To be sure, swords abound in the Arabian Nights, and there are more beheadings here than in any epic with which I’m familiar. But it is the power of story-telling rather than deeds of martial glory which is rewarded. Moreover, stories are valued not for their flattery or propaganda, but as creations of motivated individuals, intended either to delight or persuade listeners.
The centrality of persuasion against force is captured early on in the tale of the fisherman threatened with death by a djinn he has released from a brass jar. When his appeal to the Islamic version of the golden rule is turned down, he reminds himself that “I am a human being, whom God has endowed with reason and thereby made superior to him.” Then he asks whether such a large being could really fit inside a jar and declares that the djinn is lying. When the exasperated djinn proves that he can, in fact, fit inside the jar, the fisherman promptly recorks it.
Now it is the demon who invokes the golden rule and offers to make the fisherman rich. After a long story to express his fear of betrayal, the fisherman agrees to release the demon, and after an even longer adventure the fisherman receives his fortune. Commercial life is not predictable or easy, but persuasion and mutual contract--the power of the word more than the threat of force--make its heroes.
The Arbitrary Power of the State. Just as Shahrazad’s stories are models of curiosity and persuasion, Shahrayar stands as the ultimate figure of arbitrary rule in the Arabian Nights. That arbitrary rule is figured first in the magical power of the djinn, and then in the more literal figures of caliphs, issuing judgments on the lives of their subjects.
While the threatening force of these authorities is never in question, they are neither idealized nor presented as credible embodiments of justice. The arbitrariness, and often the capriciousness of these authorities is emphasized. Arbitrary death sentences are routinely rescinded for the equally arbitrary enjoyment of an amazing story—an arbitrariness underlined by a series of stories judged by a king of China as insufficiently amazing to warrant a pardon.
State power in the Arabian Nights could not be further from the rule of law, and is suggestive of merchants’ attitudes toward the many regulatory regimes they had to negotiate while trading along the silk road.
These three points merely scratch the surface of how the Arabian Nights articulate the commercial values of the culture from which they emerged. Like all great literature, it rewards serious and repeated study. To that end, my next visit to the Reading Room will focus on the actual representations of merchants in those stories.
This post is dedicated to the memory of Michael Murrin, who among many other things first introduced me to Epic and Empire, and whose last book also concerned the intersection of trade and literature. As a scholar, his erudition was matched only by his immense kindness and decency.