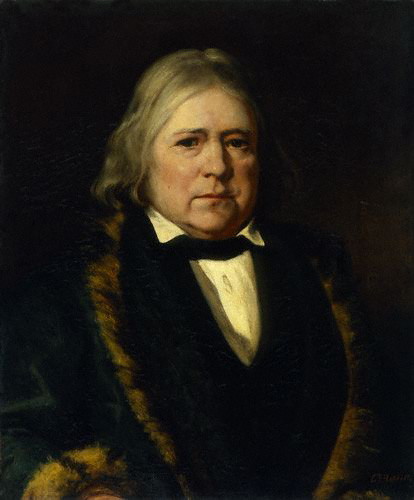 The English M.P. and free trade orator William Johnson Fox (1786-1864) points out the hypocrisy of the protectionists who urge the nation to put “England First” by only buying things made there:

What is the career of the man whose possessions are in broad acres (the protectionist land owners)? Why, a French cook dresses his dinner for him, and a Swiss valet dresses him for dinner; he hands down his lady, decked with pearls that never grew in the shell of a British oyster; and her waving plume of ostrich-feathers certainly never formed the tail of a barn-door fowl. The viands of his table are from all countries of the world; his wines are from the banks of the Rhine and the Rhone. In his conservatory, he regales his sight with the blossoms of South American flowers. In his smoking-room, he [185] gratifies his scent with the weed of North America. His favourite horse is of Arabian blood; his pet dog, of the St. Bernard’s breed. His gallery is rich with pictures from the Flemish school, and statues from Greece. For his amusements, he goes to hear Italian singers warble German music, followed by a French ballet. If he rises to judicial honours, the ermine that decorates his shoulders is a production that was never before on the back of a British beast. His very mind is not English in its attainments; it is a mere picnic of foreign contributions. His poetry and philosophy are from Greece and Rome; his geometry is from Alexandria; his arithmetic is from Arabia; and his religion from Palestine. In his cradle, in his infancy, he rubbed his gums with coral from Oriental oceans; and when he dies, his monument will be sculptured in marble from the quarries of Carrara.

William Johnson Fox (1786-1864) was an English Member of Parliament and one of the best free trade orators in the years leading up to the repeal of the protectionist Corn Laws in January 1846. One of his greatest speeches was given in the Convent Garden Theatre on January 25th, 1844 where he ridiculed the protectionist large land owners for defending protection on the grounds that England should not be dependent on foreigners for the things they need, such as food. He then proceeded sarcastically to list all the things these country gentlemen bought from overseas, from the guano they spread on their fields to the marble headstones they erected for their dead relatives, thus brilliantly exposing their hypocrisy. But behind the sarcasm and ridicule was a deep moral fervour which drove many of the Anti-Corn Law Leaguers like Fox and Richard Cobden. This took two forms. Firstly, there was the hatred of the political privileges enjoyed by a particular class of wealthy landowners who benefited from the artificially high price of grain (“corn”) as the expense of the ordinary working people of England. Secondly, that tariffs and trade prohibitions violated the natural rights of people, as Fox put it eloquently, “for if anything can be called a natural right, it is that of man’s exchanging the produce of his honest labour freely in the world’s markets for whatever he may desire which may be most welcome to him, ministering to his existence or enjoyment.”