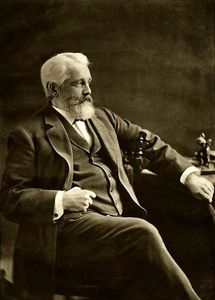 Edward Atkinson was a cotton manufacturer in New England before becoming a radical abolitionist who worked to support runaway slaves in the underground railroad and to raise money for John Brown. Later, he was inspired by the free trade ideas of Richard Cobden and John Bright and became an ardent supporter of free trade in the US. In 1898 he helped found the Anti-Imperialist League in order to oppose the annexation of the Philippines.