In commemorating the hundredth anniversary of Benjamin Tucker's journal Liberty (1881–1908), Wendy McElroy's following essay, “Benjamin Tucker, Individualism, and Liberty,” contributes a fascinating chapter to the history of libertarian thought and American individualism. Like all good history, her essay illuminates our understanding of the past, in this instance a significant episode in American intellectual history, but sadly neglected by most academic historians. By awakening our sense of the history of ideas, the essay stimulates us to revise our sense of the present, and thereby to speculate on the possibilities of individual freedom in the future.

As heirs of the authentically American values of Josiah Warren's “sovereignty of the individual,” Tucker and his circle of maverick libertarian thinkers are historically significant because they demonstrate how genuinely homegrown and “Yankee” the roots of American radical individualism were. As uncompromising advocates of liberty and opponents of authority in all its forms, Tucker and his tradition also offer us the legacy of a suggestive analysis of how true community is compatible with rugged individualism.

The pedigree of his libertarian philosophy, Tucker insisted, was no “imported article” but rather a vital part of the native American heritage: “So far as priority of time is concerned, the credit seems to belong to Warren, the American.... Of the purest revolutionary blood, too, this Warren, for he descends from the Warren who fell at Bunker Hill.” (Liberty March 10, 1888). Tucker together with his “mentor”, Josiah Warren (1798–1874) and Warren's intellectual progeny—Stephen Pearl Andrews, Lysander Spooner, William B. Greene, and Ezra Heywood—were Yankees to the core. All were born in Massachusetts and were steeped in the libertarian traditions of the American Revolution, the “spirit of ‘76.” Ezra Heywood affirmed the same point in the pages of Tucker's Radical Review when he claimed that Warren's doctrine of the sovereignty of the individual and anarchism were “only a new assertion of the ideas of self-rule and self-support which Jefferson put into the Declaration of Independence, 1776.” Similarly, in “Anarchism and American Traditions,” Voltairine de Cleyre rooted the libertarian conception of society in the liberal Jeffersonian traditions of the American Revolution. Tucker himself underlined these American origins of his belief that “all the affairs of men should be managed by individuals or voluntary associations” and boasted: “Anarchists are simply unterrified Jeffersonian Democrats.” (Liberty March 10, 1888).

Born in South Dartmouth, Massachusetts in 1854 (the same year that Thoreau published Walden, his paean to transcendentalist individualism), Benjamin imbibed in his youth the Jeffersonian and Jacksonian democratic spirit of anti-institutional individualism. [For these individualistic currents, see Eric Foner, “Radical Individualism in America,” Literature of Liberty 1 (July–September 1978); and George M. Frederickson, The Inner Civil War: Northern Intellectuals and the Crisis of the Union. New York: 1965, pp. 7–22.] His family and social environment was a hothouse fostering freedom of thought, religious dissent, and political nonconformity. Tucker's maternal great-grandfather was a follower of the radical free-thinker Tom Paine; his mother was an extreme Unitarian; and his father a rebellious Quaker and Jeffersonian democrat. Little wonder that Tucker cherished the sovereign self, guarded his intellectual independence, and resisted the authority and institutions of religion, education, and politics. He read widely in the classical liberals, and at fourteen attended lectures at the New Bedford lyceum to hear such individualist luminaries of Transcendentalist and abolitionist thought as Ralph Waldo Emerson, William Lloyd Garrison, and Wendell Phillips.

At sixteen, Tucker displayed his fierce independence of mind and distrust of any institution that might compromise his integrity, by balking at his parents' desire to send him to college at Harvard. In 1872, at the age of 18, he finally forged diverse American individualistic currents into a new synthesis after meeting the native American anarchists, Warren, Spooner, Greene, and Heywood. Upon reading Warren's True Civilization, an exposition of the sovereignty of the individual and its appropriate economic system, Tucker endorsed individualist anarchism and began his career as publicist and “plumb-line” polemicist for the anti-statist variety of libertarianism. After publishing the short-lived Radical Review (1877–1878), he founded Liberty in 1881.

Ironically, when Warren relayed to Tucker the torch of the libertarian tradition on the eve of the Centennial celebration of the “spirit of ‘76”, America was experiencing the twilight of that very spirit. Individualism was on the wane and in conflict with the ascendent forces of statist centralization and organization, which were ushered in by war, regulation, and imperialist expansion. George M. Frederickson's The Inner Civil War, mentioned above, chronicles the tragedy of how, in the aftermath of the Civil War, American intellectuals abandoned the radical individualism, anti-institutionalism, and anti-statism of the pre-Civil War period. Forgetting the individualist creed of Emerson's “American Scholar” (1837), postbellum intellectuals were in large part transformed by the passions and discipline of the Civil War into enthusiastic supporters of government, state organization and reform, and bureaucratic centralization in other social institutions such as charity and education.

In the face of mounting culture of collectivism, institutional bureaucratization, and anti-individualist, authoritarian political forces, Tucker and the friends of Liberty kept alive the independent-minded ideals of Emerson's “American Scholar” and the traditions of creative individual freedom. That such innovators in American political philosophy, social thought, and culture as Tucker's individualists were non-academic intellectuals working outside formal educational institutions is a grave indictment of the conservatism of America's official culture and establishment education. Whereas in arts, letters, and philosophy, the official culture and academy ignored or persecuted unconventional American geniuses such as Whitman, Tucker's Liberty welcomed individual creative talent and displayed cosmopolitan and avant-garde tastes. At establishment universities such as Harvard the agenda for philosophical and political speculation was determined by the cultural and political elite. Liberty's intellectuals, however, unencumbered by institutional conservatism and anti-Darwinian bias set their own individualist agenda for a radical political, economic, social, and cultural reform. [On the decline of American institutional philosophy under the pressures of professionalization, specialization, and anti-humanistic arcane games of abstract thought, see Bruce Kuklick, The Rise of American Philosophy: Cambridge, Massachusetts, 1860–1930, New Haven: Yale Univ. Press, 1977.]

Tucker's Liberty and the libertarian traditions that continue to grow today have much to contribute to a reawakening of America's memory of her creative and individualist past. Perhaps even more importantly, these currents of American individualist thought may offer some guidelines to the political and cultural perplexities of the present and future. 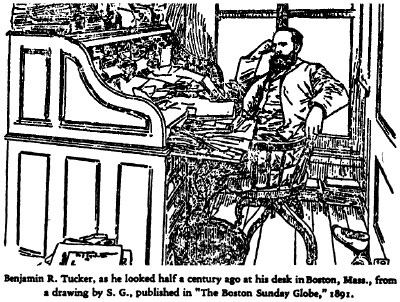 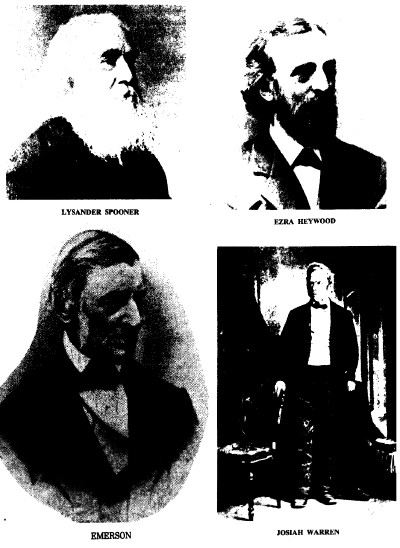