Mill and Taylor on Women

The University of Toronto edition of the Collected Works of J.S. Mill did not gather all of Mill's writings on women into one volume (as they did with his writings on India). On this page we have done so, with links to the online edition. 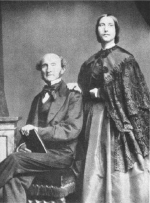 From Volume XXI: Essays on Equality, Law, and Education

Essays on Equality, Law, and Education

From Volume XXVIII: Public and Parliamentary Speeches Part I