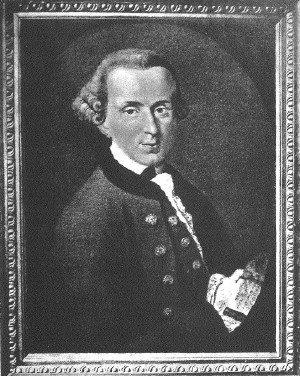 Immanuel Kant (1724-1804) made pivotal contributions to the study of ethics and epistemology in the eighteenth century. Born to a poor saddle maker in Königsberg, Prussia, he never traveled more than fifty miles from his home. Originally a student of theology, he turned to physics and mathematics and eventually earned his doctorate in 1755. For the next fifteen years he worked as a private tutor, then obtained a post at the nearby University of Königsberg, where he remained until a few years before his death.

Although he is often associated with the Enlightenment, Kant had strong reservations about the philosophical foundations of most Enlightenment theories of morality and human understanding. He was particularly dissatisfied with the notions of reason and natural law that his contemporaries persistently propounded. He sought to transcend the limits of these ideas by bridging the philosophical gap between Continental idealism and English empiricism in his most famous treatise, Critique of Pure Reason (1781).

In that work Kant attempted to preserve the idealist’s sense of a transcendent truth beyond sensory experience and the empiricist’s contention that reality requires experiential verification. He thought he had achieved such a synthesis by making the distinction between fact and form. The senses perceive accurately the existence of things in nature, he argued, but the mind provides the order or form in which those objects are understood. These forms are prior to experience, have the character of mathematical rules, and are valid in and of themselves. They provide the categories of space and time necessary for the perception of real things. One can see at most two sides of a building at a time, for instance, but the mind works logically to construct a picture of the entire structure. Thus the mind must possess a logical pattern that supplies order to the circumstantial facts of the world. The realm of the ideal of pure reason requires a material world on which to work. Without an objective reality that is perceivable by the senses, reason itself would be impossible.

Kant insisted that the necessity of living in the world does not require that belief in transcendent truths be sacrificed to circumstance and moral relativism. In the Critique of Practical Reason (1788), he developed the ethical implications of his epistemology, devising a stern morality based on his notion of the categorical imperative. The essence of the categorical imperative is that one should act only in accordance with what one would wish to be a universal law. Some have characterized this principle as a secularized Golden Rule.

It was by way of the categorical imperative that Kant sought to assert the existence of a moral ideal emanating from the reason of the mind and its preexisting categories of order. For Kant, this carried a profound implication for the ethical standing of the individual in society. The human being must be treated with the utmost respect, never as a means to an end, but as an end in himself.

Works by the Author

The Cambridge Edition of the Works of Immanuel Kant (Cambridge University Press).

Kant, Immanuel. The Fundamental Principles of the Metaphysics of Ethics. Translated by Thomas Abbott Kingsmill. Longmans, Green and Company, 1947.

Works about the Author

Paul Guyer, Kant and the Experience of Freedom: Essays on Aesthetics and Morality (Cambridge University Press, 1996).

Susan Meld Shell, The Rights of Reason: A Study of Kant’s Philosophy and Politics (University of Toronto Press, 1980).

The biographical material about the author originally appeared on The Goodrich Room: Interactive Tour website.