Home / Essays / About us / Images of Liberty and Power / Representative Women: An Image of Several Suffragists (1870)

Created circa 1870 by the artist L. Schamer, “Representative Women” is a combinative portrait of seven influential suffragists who were popular on the lyceum lecture circuit from about 1860-1880. The popularity of this style of combined portraiture arises, in part, from its ability to convey the distinct personalities of each of the subjects while creating a whole that is greater than its parts. 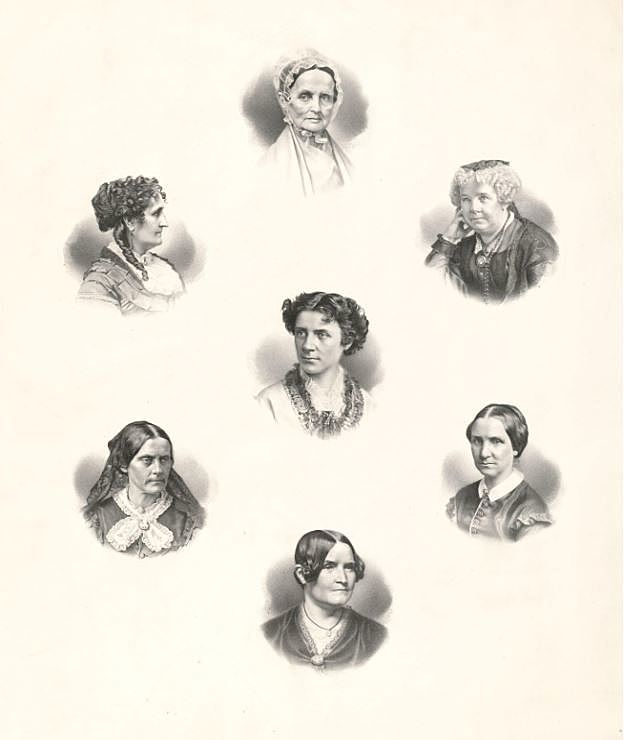 At the top is Lucretia Coffin Mott, (3 Jan 1793 - 11 Nov 1880), the Quaker preacher and famed abolitionist and women’s rights advocate who organized the 1848 Seneca Falls Convention with Elizabeth Cady Stanton.

Moving clockwise, the image depicts Elizabeth Cady Stanton, (12 Nov 1815 - 26 Oct 1902) who organized the 1848 Seneca Falls Convention with Lucretia Coffin Mott, for which Stanton authored the “Declaration of Sentiments,” transforming the Declaration of Independence into a call for women’s rights.

Beneath Stanton is Mary Ashton Rice Livermore, (19 Dec 1820 - 23 May 1905), the Civil War nurse, author, and founder of the women’s rights newspaper The Agitator.

At the bottom of the portrait, Lydia Maria Francis Child, (11 Feb 1802 - 20 Oct 1880) is best known now as the author of “Over the River and Through the Wood” but was known in the lyceum circuit as a novelist and domestic advice author, as well as an outspoken advocate for abolition, women’s rights and Native American rights.

Moving clockwise from Child, we find Susan B. Anthony, 15 Feb 1820 - 13 Mar 1906 who co-founded, along with Elizabeth Cady Stanton, organizations to support temperance, abolition,and women’s rights. Anthony was an enormously influential and popular speaker, giving as many as 100 lectures a year in support of women’s rights.

Just above Anthony, the image depicts Sara Jane Clarke Lippincott, (23 Sep 1823 - 20 Apr 1904) the poet, writer, editor, journalist, and publisher who lectured widely on the abolition of slavery and capital punishment, and the need for prison reform.

At the center of the image is a portrait of Anna Elizabeth Dickinson, (28 Oct 1842 - 22 Oct 1932), the first woman to address the U.S Congress and the second to summit Pike’s Peak. A protege of Lucretia Stone Mott, Dickinson was a wildly popular speaker who once received a standing ovation on the floor of the House of Representatives, and was the highest paid woman on the lyceum circuit.

Taken all together, the combined portrait gives the viewer the sense of a group of distinct individuals, united by the common cause of the fight for suffrage. With much younger Dickinson at the center of the image, one is also encouraged, perhaps, to see the women who surround her as mentors from a previous generation surrounding their protege and heir with support and inspiration.