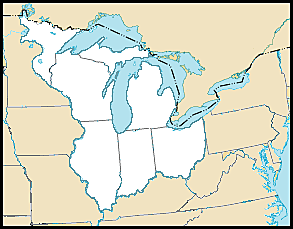 An ordinance for the Government of the Territory of the United States, north-west of the River Ohio be it ordained by the United States in Congress assembled, That the said territory, for the purposes of temporary government, be one district; subject, however, to be divided into two districts, as future circumstances may in the opinion of Congress, make it expedient.

Be it ordained by the authority aforesaid, That the estates, both of resident and non-resident proprietors in the said territory, dying intestate, shall descend to, and be distributed among their children, and the descendants of a deceased child in equal parts; the descendants of a deceased child or grandchild, to take the share of their deceased parent in equal parts among them: And where there shall be no children or descendants, then in equal parts to the next of kin, in equal degree; and among collaterals, the children of a deceased brother or sister of the intestate, shall have in equal parts among them, their deceased parents’ share; and there shall in no case be a distinction between kindred of the whole and half blood; saving in all cases to the widow of the intestate, her third part of the real estate for life, and one third part of the personal estate; and this law relative to descents and dower, shall remain in full force until altered by the legislature of the district.—And until the governor and judges shall adopt laws as herein after mentioned, estates in the said territory may be devised or bequeathed by wills in writing, signed and sealed by him or her, in whom the estate may be (being of full age) and attested by three witnesses;—and real estates may be conveyed by lease and release, or bargain and sale, signed, sealed, and delivered by the person being of full age, in whom the estate may be, and attested by two witnesses, provided such wills be duly proved, and such conveyances be acknowledged, or the execution thereof duly proved, and be recorded within one year after proper magistrates, courts, and registers shall be appointed for that purpose; and personal property may be transferred by delivery; saving, however, to the French and Canadian inhabitants, and other settlers of the Kaskaskies, Saint Vincent’s, and the neighboring villages, who have heretofore professed themselves citizens of Virginia, their laws and customs now in force among them, relative to the descent and conveyance of property.

Be it ordained by the authority aforesaid, That there shall be appointed from time to time, by Congress, a governor, whose commission shall continue in force for the term of three years, unless sooner revoked by Congress; he shall reside in the district, and have a freehold estate therein, in one thousand acres of land, while in the exercise of his office.

The governor and judges, or a majority of them, shall adopt and publish in the district, such laws of the original States, criminal and civil, as may be necessary, and best suited to the circumstances of the district, and report them to Congress, from time to time; which laws shall be in force in the district until the organization of the General Assembly therein, unless disapproved of by Congress; but afterwards the Legislature shall have authority to alter them as they shall think fit.

For the prevention of crimes and injuries, the laws to be adopted or made shall have force in all parts of the district, and for the execution of process, criminal and civil, the governor shall make proper divisions thereof—and he shall proceed from time to time, as circumstances may require, to lay out the parts of the district in which the Indian titles shall have been extinguished, into counties and townships, subject, however, to such alterations as may thereafter be made by the legislature.

The representatives thus elected shall serve for the term of two years; and in case of the death of a representative, or removal from office, the governor shall issue a writ to the county or township, for which he was a member, to elect another in his stead, to serve for the residue of the term.

The Governor, judges, Legislative Council, Secretary, and such other officers as Congress shall appoint in the district, shall take an oath or affirmation of fidelity, and of office; the Governor before the President of Congress, and all other officers before the Governor. As soon as a legislature shall be formed in the district, the Council and House assembled, in one room, shall have authority, by joint ballot, to elect a delegate to Congress, who shall have a seat in Congress, with a right of debating, but not of voting during this temporary government.

And for extending the fundamental principles of civil and religious liberty, which form the basis whereon these republics, their laws and constitutions are erected; to fix and establish those principles as the basis of all laws, constitutions, and governments, which forever hereafter shall be formed in the said territory: to provide also for the establishment of States, and permanent government therein, and for their admission to a share in the federal councils on an equal footing with the original States, at as early periods as may be consistent with the general interest:

It is hereby ordained and declared by the authority aforesaid, That the following articles shall be considered as articles of compact between the original States, and the people and States in the said territory, and forever remain unalterable, unless by common consent, to wit:

Article the first. No person, demeaning himself in a peaceable and orderly manner, shall ever be molested on account of his mode of worship or religious sentiments, in the said territory.

Article the second. The inhabitants of the said territory, shall always be entitled to the benefits of the writ of habeas corpus, and of the trial by jury; of a proportionate representation of the people in the legislature; and of judicial proceedings according to the course of the common law. All persons shall be bailable, unless for capital offenses, where the proof shall be evident or the presumption great. All fines shall be moderate; and no cruel or unusual punishments shall be inflicted. No man shall be deprived of his liberty or property, but by the judgment of his peers, or the law of the land, and, should the public exigencies make it necessary, for the common preservation, to take any person’s property, or to demand his particular services, full compensation shall be made for the same. And, in the just preservation of rights and property, it is understood and declared, that no law ought ever to be made, have force in the said territory, that shall, in any manner whatever, interfere with or affect private contracts or engagements, bona fide, and without fraud, previously formed.

Article the third. Religion, morality, and knowledge, being necessary to good government and the happiness of mankind, schools and the means of education shall forever be encouraged. The utmost good faith shall always be observed towards the Indians; their lands and property shall never be taken from them without their consent; and, in their property, rights, and liberty, they never shall be invaded or disturbed, unless in just and lawful wars authorized by Congress; but laws founded in justice and humanity shall from time to time be made for preventing wrongs being done to them, and for preserving peace and friendship with them.

Article the fourth. The said territory, and the States which may be formed therein, shall forever remain a part of this Confederacy of the United States of America, subject to the Articles of Confederation, and to such alterations therein as shall be constitutionally made; and to all the Acts and ordinances of the United States in Congress assembled, conformable thereto. The inhabitants and settlers in the said territory, shall be subject to pay a part of the federal debts contracted or to be contracted, and a proportional part of the expenses of government, to be appointed on them by Congress according to the same common rule and measure by which apportionments thereof shall be made on the other States; and the taxes for paying their proportion shall be laid and levied by the authority and direction of the legislatures of the district or districts, or new States, as in the original States, within the time agreed upon by the United States in Congress assembled. The legislatures of those districts or new States shall never interfere with the primary disposal of the soil by the United States in Congress assembled, nor with any regulations Congress may find necessary for securing the title in such soil to the bona fide purchasers. No tax shall be imposed on lands the property of the United States; and, in no case, shall non-resident proprietors be taxed higher than residents. The navigable waters leading into the Mississippi and St. Lawrence, and the carrying places between the same, shall be common highways and forever free, as well to the inhabitants of the said territory as to the citizens of the United States, and those of any other States that may be admitted into the confederacy, without any tax, impost, or duty therefor.

Article the fifth. There shall be formed in the said territory, not less than three, nor more than five States; and the boundaries of the States, as soon as Virginia shall alter her act of cession, and consent to the same, shall become fixed and established as follows, to wit: The western State in the said territory, shall be bounded by the Mississippi, the Ohio and Wabash rivers; a direct line drawn from the Wabash and Post Vincents due north to the territorial line between the United States and Canada; and by the said territorial line to the lake of the Woods and Mississippi. The middle State shall be bounded by the said direct line, the Wabash from Post Vincents to the Ohio; by the Ohio, by a direct line drawn due north from the mouth of the Great Miami, to the said territorial line, and by the said territorial line. The eastern States shall be bounded by the last mentioned direct line, the Ohio, Pennsylvania, and the said territorial line: Provided however, and it is further understood and declared, that the boundaries of these three States shall be subject so far to be altered, that if Congress shall hereafter find it expedient, they shall have authority to form one or two States in that part of the said territory which lies north of an east and west line drawn through the southerly bend or extreme of Lake Michigan. And whenever any of the said States shall have sixty thousand free inhabitants therein, such State shall be admitted, by its delegates, into the Congress of the United States, on an equal footing with the original States, in all respects whatever; and shall be at liberty to form a permanent constitution and State government: provided the constitution and government so to be formed, shall be republican, and in conformity with the principles contained in these articles; and so far as it can be consistent with the general interest of the confederacy, such admission shall be allowed at an earlier period, and when there may be a less number of free inhabitants in the State than sixty thousand.

Article the sixth. There shall be neither slavery nor involuntary servitude in the said territory, otherwise than in the punishment of crimes whereof the party shall have been duly convicted: Provided, always, That any person escaping into the same, from whom labor or service is lawfully claimed in any one of the original States, such fugitive may be lawfully reclaimed, and conveyed to the person claiming his or her labor or service as aforesaid.

Be it ordained by the authority aforesaid, That the resolutions of the 23rd of April, 1784, relative to the subject of this ordinance, be, and the same are hereby repealed and declared null and void.